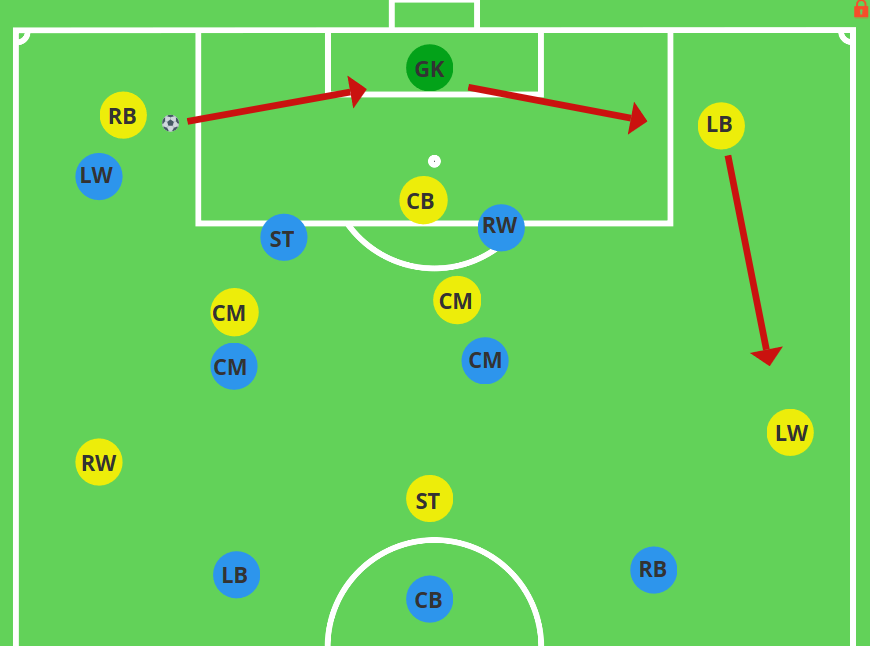 Nearly every single professional team these days strives to play out from the back. Gone are the days when a goalkeeper would launch the ball up the field to a fast/tall striker to chase on to or nod down. Build-up play has become more and more important in the professional game and youth teams are beginning to take notice too. From a youth development perspective, playing out of the back is far more beneficial for all players than just one player kicking it up the field as far as they can in hopes that a fast, physical player will get on the end of it. When playing out of the back, more players get the opportunity to touch the ball and work on the basics of the game while developing tactical knowledge on the proper ways to play football. Here is some tips and tricks for coaching Playing out from the Back at the 9v9 level. 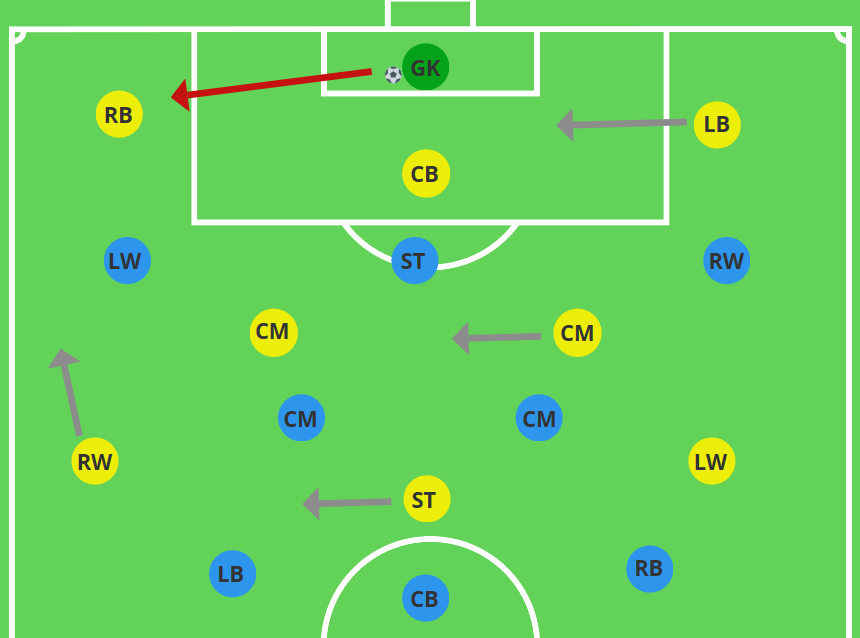 Whenever the goalkeeper has the ball, the fullbacks should look to get wide. Both fullbacks should be ready to receive, as they are the first preferred option when beginning our build-up play. Once the ball goes to one side of the field and we can safely play out on that side, we need the far-sided fullback, far sided centre mid and the striker to shift toward that side of the ball (the strong side). The fullback can then look to play in the winger, central midfielder or even the striker if they have found themselves in space (in between the lines of blue players).  If the fullback can not go forward, they should look to go backwards to the goalkeeper.

KEY FACTOR: CM’s in Between the Lines 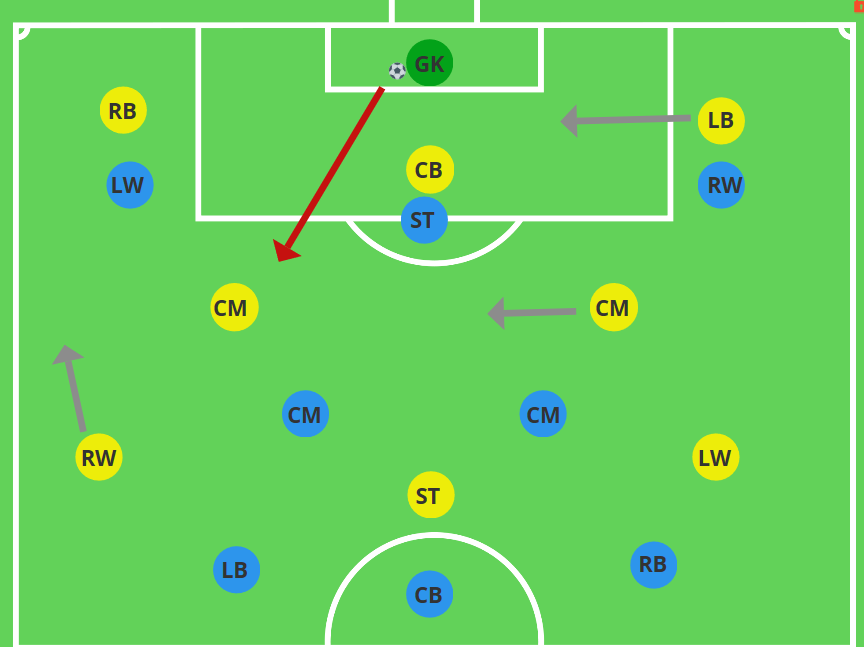 Whenever the goalkeeper has the ball, the central midfielders should be looking to create space in between the lines of the opposition. In the example above, this means in between the gap created by the opposition’s front three and midfield two. The central midfielders also need to position themselves where the opposition winger and striker cannot cut off their pass. Once they get into a good position they must not stand still and wait. Being ready to receive is a constant process of scanning the field and off-the-ball movement in order to get into the most advantageous position to receive. This is a riskier pass than out wide to our fullbacks so it should only be done if we cannot play our fullbacks, especially if the opposition has pressed us high. That being said if we can pull this pass off we are in a great position to move forward so it is still a good option.

In this example, the opposition team has pressed us high and playing either our central midfielders or fullbacks could create a risky situation where we lose possession close to our goal. But this still is not the time to go long! Instead we can create chaos for the opposition through positional rotation of the two fullbacks and two central midfielders. The idea is that the opposition will follow our fullbacks up the field, creating space for the central midfielder to be able to receive in the fullback’s position. The goalkeeper must be patient for this switch to occur. Both goalkeeper and defenders also must recognize when we are in danger and might need to use this tactic. The term “switch” or the use of a number can be used to trigger this rotational movement. If the opposition never presses us high there is no need for positional rotation as we can just play quickly to our fullbacks and advance up the field.

KEY FACTOR: STRIKER IN BETWEEN THE LINES

In most moments of the game, we need our striker to stay high. However, when playing out from the back we can attempt to create numerical superiority through the movement of the striker toward the play. This particularly works well with two striker systems when one can drop in to receive and the other can stay high. In 9v9, the wingers can be the ones to stay high and wide as our striker comes toward play to create space in between the lines or in the example above, even to be an extra option closer to the ball. The movement of the striker is integral throughout all build-up phases as they should come to the strong side of the field (closest to the ball) at every opportunity.

Anywhere on the field if we cannot go forwards, we will look to go backwards. The goalkeeper can be an essential player to use when going backwards, as it is unlikely that the opposition striker is able to get their in time. We can then use the goalkeeper to switch play to the other side – the weak side of the opposition. Through playing the ball out to our right defender, all players on the opposition have shifted toward that side of the ball, as have our central midfielders. However, if we can maintain width on the opposite side through both our fullback and winger, we can use them to switch play and exploit the weak side of the opposition. Higher up the field, the centre back can also be a great option for going backwards and switching play, but they must drop through a backwards movement away from the opposition striker. In the example above, when the ball goes out to the right side, the left defender may need to shift to the middle just in case something goes wrong. But as soon as see that a switch of play may be on, they can move backwards (facing the ball) into a wider position. If this is something that is pre-determined, we can also have our fullback always remain wide as an outlet to switch play rather than shifting toward the middle when it does not go to their side.

So there it is! Tips and tricks to playing out from the back in 9v9 soccer. Key aspects discussed in this article include positional rotation, switching play, width from the fullbacks, and positioning of the central midfielders and striker in between the lines. Thanks for reading and see you soon! You might also enjoy -> Playing Out From The Back – Full Session Plan.
If you enjoyed this article, be sure to check out our Coaching 9v9 Ebook!