Although players are constantly thrust into 1v1 battles on a football pitch, defending is something that the whole team needs to engage in as a unit. As a result, players need to learn how to support each other in defense, even if they are not directly involved with the play. This article will explore support in defense for 9v9 teams through diagrams involving the 3-2-3 and 3-4-1 formations.

SHIFTING WITH THE PLAY 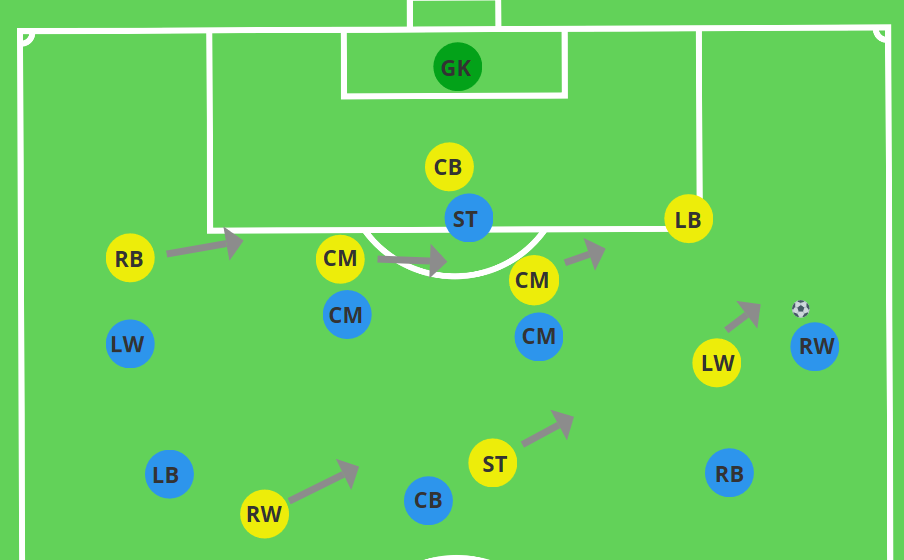 Whenever we are defending, we need to be reactive to the movements and passes of the opposition. One such way of doing that is by shifting and sliding with the play. If the ball finds its way to our left side, all players should have an inclination to be at the very least more to that side of the field than the other. Our right sided players should come to around the middle, as everyone else slides over and ensures they don’t have a route to play back over to the right. If we can shift as a unit, we can eliminate space and give the opposition fewer routes forward, thus delaying their ability to attack.

Shifting to the side of the ball can also be more proactive, such as when we are playing out from the back and the far-sided fullback shifts to the middle. There is no immediate danger, but just in case something goes wrong then we have a player there to help clean up the mess. However, note that if the right back in the example below decides to play back to the goalkeeper, the left-back can immediately get wide again, to allow for a switch of play to occur. So even when we are being proactive with our support in defense (because we have the ball and there is no immediate danger) we still need to be thinking about how to support in attack.

Communication is something that can significantly aid in our ability to support each other in defense. Opposition attackers rarely stick to just one position and so as they move from right to left, we need to be in constant communication about the movement of their front players. Phrases like “coming your way” or “watch number _” can be helpful in this regard. Often times players communicate, but sometimes it is not loud enough or with enough urgency. When the ball is in our defensive third, the alarm bells need to be ringing and we need to have a “defend at all costs” mentality that can be sparked by one or two players rallying the others to have that mentality through their communication.

When possible, if the opposition is able to advance into our half, we want to force them to the outside. We want to protect the middle of the field and push them away from our goal. As a method of doing this, we become compact (narrow) and get closer together, thus eliminating both space and potential options the other team might have in the middle. Our central midfielders have a massive role in this as they can shift and slide with the movement of the ball to cut off and intercept passes into the other team’s attackers. In the above example, the left-centre-mid is able to cut off a pass to both their striker and their central midfielder through the position they take up. By doing this, they are also supporting every other player around them, such as freeing up the left-back if they suddenly need to pressure the ball, and allowing the left-wing time to get back because the player on the ball will have no passing options and their attack will be delayed.

So there it is! Support in Defense for 9v9 teams. Defending is ultimately something that players have to learn how to do as a team. Although it is typically more reactive than proactive, by following some of these steps your team can always be prepared to win the ball back in any situation. Thanks for reading and see you soon!

Be sure to check out the rest of this series below…

One thought on “Support in Defense (9v9)”