Transitional moments are an aspect of the game that most coaches neglect to focus on as much as they should. Transitions both from attack to defense and from defense to attack, are essential and can be a source of both goals and goals conceded.

Attacking transitions can be defined as the moment of time between gaining possession and the reshaping and restructuring of our team to get forward and attack, looking to score. Attacking transitions are a concept that would fall under the umbrella term of counter attacking – winning the ball back and looking to attack right away with speed and intensity. Integral elements to attacking transitions include the decision of when to dribble vs. when to pass, width, speed, and off the ball movement. In this article, we will touch on all of these aspects, with a special emphasis taken on the 9v9 game and how attacking transitions look in the popular 3-2-3/3-4-1 formations.

KEY FACTOR: WHEN TO DRIBBLE VS. WHEN TO PASS

At the moment that a player regains possession of the ball, the first thing that they should be thinking about is whether to pass or dribble. In general these are some of the key differences of when to pass vs. when to dribble… 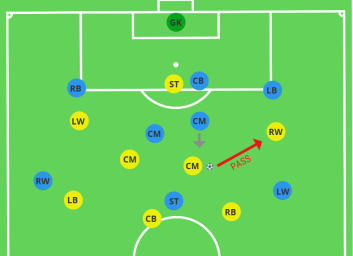 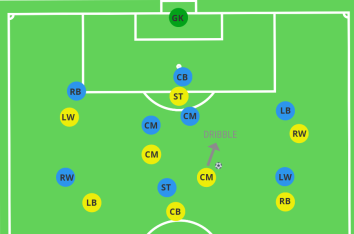 This is a general guideline and every situation in the game will look different. However, the key thing to consider is generally if you have space, take it. If you are being pressured, quickly decide what your best option is for a pass. Although we do not want to rush our decisions, it is also important to note that any unnecessary touches can slow us down and even if riskier, one-touch passing can often be the fastest way to transition. 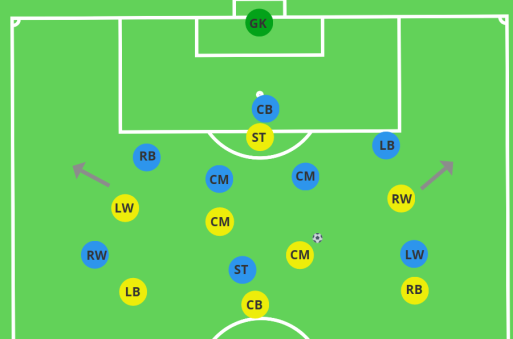 KEY FACTOR: MOVEMENT OFF THE BALL 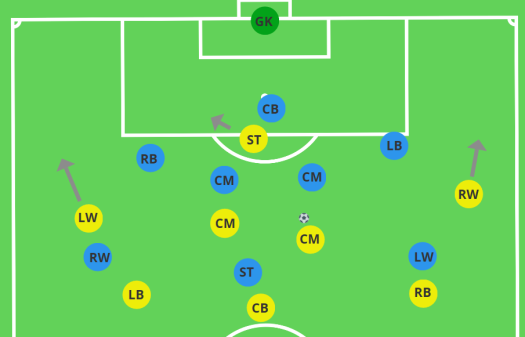 After regaining possession, our movement off the ball to get into advantageous positions is vital to our ability to have a successful transition. Wingers or wing-backs will need to maintain their width, but strikers and central midfielders should also be looking for ways of exploiting the opposition. They should be looking to move away from the opposition defenders and away from the player in possession of the ball. If we are too close to the ball or run into the path of the player with the ball, this will only slow down our transition.

After regaining possession, both the player with the ball and the nearby attacking players need to attack with speed. We need to give the opposition as little time to recover as possibe. Players should be careful that they don’t run so fast that they stray off-side and should always have an eye on the ball, curving their runs to always be able to see what is happening. Like vertical passes, vertical runs will also be more advantageous to our ability to attack with speed than horizontal ones.

So there it is! The most important factors for successful attacking transitions at the 9v9 level and 3-2-3/3-4-1 formations. Even with the diagrams becoming more specific to the 9v9 level, the concepts above can be taken into any context and any game format. Thanks for reading and see you soon!

Be sure to check out more in this series….