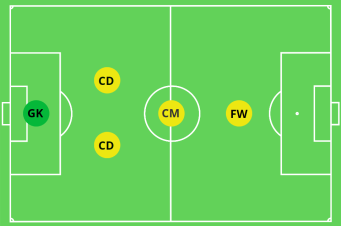 Formations shouldn’t really come into play too much in the 5v5 game format, nor should they ever really be emphasized for players young enough to be playing 5v5. However, 5v5 is not only a popular format for younger players, but Futsal and Indoor soccer games around the world. In order to develop a certain style or principles of play with any 5v5 group, coaches should look no further than The Mastermind‘s guide to the best formations for 5v5. 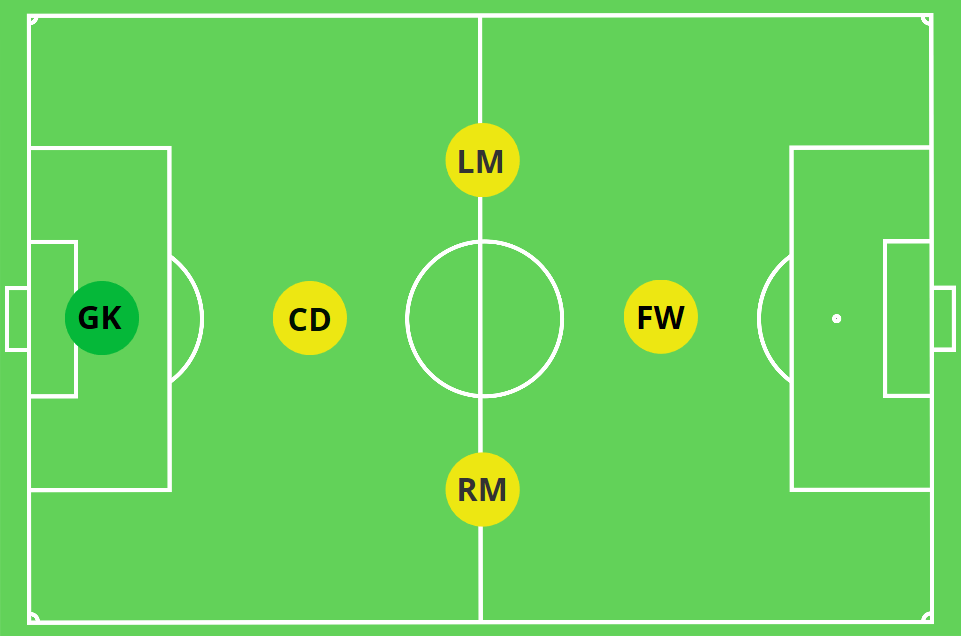 The Diamond formation has to be the most commonly used 5v5 game format out there. It provides balance between defense and attack, while allowing two midfielders to be a link between both. The diamond shape is also a common shape found in formations of all different types of game formats, such as the 4-4-2 Diamond Formation in 11v11 full-field football. To break down the diamond shape even more, the 1-2-1 offers opportunities to create another popular shape in the game, with triangles everywhere you look. The 1-2-1 formation is also effective for playing in between the lines and creating numerical advantages in possession. The main draw-back to this formation is simply that young players all want to attack. If the defender goes forward and joins in the fun, a team can easily be exposed. This becomes even more when playing against an opposition full of players who also just want to attack. But with the great shapes and balance the 1-2-1 provides, it is easy to see why this has become the most popular game format for 5-a-side teams.

The other most popular formation for 5-a-side football is the 2-2, otherwise known as the ‘square’ or ‘box’. Just as its name suggests, the 2-2 includes two defenders and two forwards. Having these clearly defined roles between defense and attack can be great for helping young players understand the game. But, with a lack of a midfielder, these clearly defined roles can quickly become not so clearly defined in transitional moments. Forwards might not feel the necessity to help out in defensive phases, while the same can go the other way for defenders. Perhaps even more crucially, build-up phases might also have to be more direct. As a result, teams looking to employ a possession-based style of football might not want to go down this route. However, a direct approach can prove to be incredibly effective when coming up against teams with only one defender. Particularly on a small field where even a U8 player can kick the ball from one end of the field to the other, two forwards coming up against one defender will undoubtedly be a lot to handle. As mentioned in the previous discussion, young players can also be a bit all over the place with their positioning. Having two more “forward-thinking” players and two more “defensive-minded” players may be a great benefit to combatting their erratic behaviour and working to ensure that at least one player is in the right position to either score a goal or stop a goal from going in.

As a key link between defense and attack, the central midfielder is one of the most important positions in the modern game. However, most 5v5 formations don’t account for a central midfielder. The 2-1-1 formation allows teams to operate with a central midfielder, a striker and two defenders, still creating balance between defense and attack, even if the formation lacks in width. Like the 1-2-1 system, the 2-1-1 formation is also effective in creating diamonds and triangles, just more so in a different area of the field where young players often don’t want to keep possession of the ball (towards their own-goal). This formation could however be effective in helping players understand the importance of playing out from the back and utilizing the goalkeeper in the build-up. The obvious drawback to the Pyramid formation is that it is very narrow. Without any wide midfielders, width has to come from either the defenders, forcing them out of position, or the striker, forcing them out of position. It may also be overly reliant on the central midfielder in both defense and attack, but at least provide for more defensive cover than the 2-2. Overall, although not so commonly used, perhaps teams should begin to take a look at this innovative 5v5 formation more often.

There is certainly no perfect formation for any game-format and that remains true for 5-a-side football/futsal. Each of the above formations has their strengths and weaknesses and provides teams with a different perspective on how to play the beautiful game. Although 5v5 is a game format where the formation hardly matters, it is important to consider how to set your team up in instilling a certain set of principles and style of play, even at the younger ages. Thanks for reading and see you soon!

Be sure to also check out….

2 thoughts on “Best Formations for 5v5”