In a league that is often called a one-horse race, Ligue 1 has been extroadinarily entertaining so far. At the beginning of the season, every single person you’d ask would have expected Paris Saint Germain to be top of the table right now but instead they sit in third place behind both AS Moncao and surprise league leaders OGC Nice. Through all the surprising outcomes that have occurred so far this season there have been some spectacular standout players and these are the best of the bunch, Ligue 1’s Team of the Season Halfway Through 2016-17.

Stephane Ruffier has consistently been one of the best goalkeepers in Ligue 1 for the past decade and is having one of his finest seasons ever so far in 2016-17. The Saint-Etienne goalkeeper has been brilliant for Les Verts as he has maintained an incredible average of 4.29 saves per goal conceded, the best ratio in Europe’s top 5 leagues this season. That incredible ratio has come about through Ruffier’s fantastic positioning and reflexes, helping him to keep 7 clean sheets in 17 matches, concede just 0.82 goals per game and make more saves than any goalkeeper in the French top flight so far, a total of 60 saves. Stephane Ruffier has been incredible for Saint-Etienne so far and has been far and away the best goalkeeper in Ligue 1 this season.

Ricardo Pereira broke on to the scene last year when he replaced Jordan Amavi in OGC Nice’s side at left-back and played even better than the French fullback had ever before. Pereira was magnificent last season and has started off this season even better since changing over to right-back. The 23-year old Portuguese defender has been one of Nice’s best players so far as they currently sit top of the table. He has been excellent going forward for Les Aiglons scoring 1 goal and assisting a further 3 so far in 15 matches. But he’s also made a massive impact for Nice in defense, completing 3.5 tackles per game, the 8th most in the league. Ricardo Pereira has been one of Ligue 1’s standout players so far and could be on his way to helping OGC Nice win a surprise league title in a league that everyone says is just a one-horse race.

Thiago Silva’s career has been on a slight decline in recent years but he still remains as the best defender in Ligue 1 by quite some margin and is proving that once again in 2016-17. The Brazilian defender has been excellent for PSG in the first half of the campaign, scoring 2 goals in 14 matches while achieving the second highest passing percentage in the league with 93.7%. Silva has also completed 82.6 passes per game and completed 2.2 interceptions per game, while also helping PSG concede just 15 goals so far. Thiago Silva is still one of the best defenders not only in Ligue 1 but in the world and continues to prove that with his fantastic performances for PSG this season.

Loic Perrin’s grey hairs may be starting to come in but he is still showing no signs of slowing down. Perrin has consistently been one of Ligue 1’s best central defenders for the past decade and is having another stellar season at the back as Saint-Etienne captain in 2016-17. Perrin has has made 14 appearances so far this campaign, scoring 1 goal, and completing 88.5% of his passes. As always though the most impressive side of his game has been his defensive awareness and resilience, allowing him to win 2.1 interceptions per game, 2.6 duels in the air per game, 5.6 clearances per game and 2.6 tackles per game. Although Saint Etienne only sit in 8th place in the table, Loic Perrin has easily been one of Ligue 1’s standout players this season yet again.

No player has made more Mastermind Team of the Week appearances in Ligue 1 this season than Fernando Marcal. Not Edinson Cavani, not Alexandre Lacazette, not anyone. Marcal has been excellent to start this season, featuring in 17 matches and assisting 5 goals so far. Marcal has been a constant threat down that left-hand side for Guingamp, creating 29 chances and whipping in 19 crosses over the course of the season thus far. But as impressive as he has been in attack he has been equally impressive in defense, completing 3.2 tackles and 2.8 interceptions per game! If the 27-year old defender continues to play like this he could soon be on his way to making a big move to a big club.

Wylan Cyprien has been the standout midfielder of Ligue 1 so far as he has led OGC Nice’s charge towards the top of the table. The 21-year-old has been exceptional so far, featuring in all 19 matches while scoring 5 goals with 2 assists in the league. Cyprien has also been fantastic in possession of the ball, completing 90.2% of his passes and completing 35 out of the 40 dribbles he has attempted this season. Cyprien was good for Lens last year but nobody would have expected him to make such a positive impact for OGC Nice this season as he has already tripled his tally in goals. Wylan Cyprien has been the league’s standout midfielder so far and may be on his way to helping lead Nice to a surprise title win.

Fabinho attracted lots of interest in the summer but nobody managed to snap him up and now he is continuing to wreak havoc in Ligue 1 with AS Monaco. The defensive midfielder has been Moncao’s key man as they sit in second place above Paris Saint Germain in the table. The Brazilian midfielder has been incredible since moving from fullback to defensive midfield at the end of last season and this season has already scored 5 goals in 18 matches. On top of those 5 goals, Fabinho has also been great in defense completing 3.6 tackles and 1.6 interceptions per game. For now, Fabinho remains one of Ligue 1’s best players and will be leading Monaco’s charge towards the UEFA Champions League quarter finals but soon he could turn into a Premier League star.

In previous seasons at Paris Saint Germain, Lucas Moura has had to bide his time from the bench and play second fiddle to other players. But ever since Zlatan Ibrahimovic’s departure, Cavani’s move back to centre forward and Unai Emery’s arrival at the club, Lucas Moura has finally been given his chance to demonstrate how good of a footballer he is. The 24-year old Brazilian winger has been integral to PSG so far, scoring 6 goals with 2 assists in 19 matches in Ligue 1 so far. Moura has also completed 38 dribbles and has helped out with 21 tackles and 21 interceptions. Lucas Moura is one of the best players in Ligue 1 and now that he has been given his chance to shine in Unai Emery’s side he is demonstrating once and for all his true talent.

Thomas Lemar may have had his breakthrough season at AS Monaco last year when he scored 5 goals and assisted 3 in 26 Ligue 1 matches but this season he has been on a whole new level, scoring 6 goals with 4 assists in just 16 appearances so far! Lemar has been crucial to Monaco’s success and has always been their liveliest player going forward. The 21-year-old has created 31 chances and completed 22 dribbles so far this campaign, while also helping out in defense with 26 tackles and 18 interceptions. Thomas Lemar has been critical to AS Monaco’s success so far this season and if he continues on with form like this he will soon become one of Europe’s most sought after players.

Edinson Cavani has always been a centre forward and now that Zlatan Ibrahimovic is gone and the Uruguayan has been given the opportunity to revert back to his old poistion we are all finally reminded of why this man was once considered to be one of the very best forwards on the planet. Cavani has been absolutely incredible this season, scoring a stunning 18 goals in just 17 matches so far, more than anyone in Europe’s top five leagues. Although he has missed more than twice the amount of shots that he has scored, scoring 18 goals before Christmas is still one incredible feat. The Uruguayan striker has been just about PSG’s only player living up to their full potential this season and if one man is going to lead them to Ligue 1 glory this season than that is without a doubt going to be Edinson Cavani.

Goal scoring centre forward Alexandre Lacazette has been one of the best forwards in Ligue 1 for quite some time now and it is honestly quite amazing that he is stilling playing his trade in France’s top flight. Nonetheless, Lacazette has been pivotal to Olympique Lyonnais’ success once again this season and has scored 13 goals in 14 appearances, only less than Edinson Cavani in the league. Those 13 goals have also come about from just 2.6 shots per game and although the French forward has only secured 1 assist this season, he has created a further 23 chances. Alexandre Lacazette is a magnificent scorer of goals and has been one of Ligue 1’s standout stars yet again in 2016-17. If anyone on this list is to earn a big money move to England, Germany or Spain anytime soon than it would have to be Alexandre Lacazette. 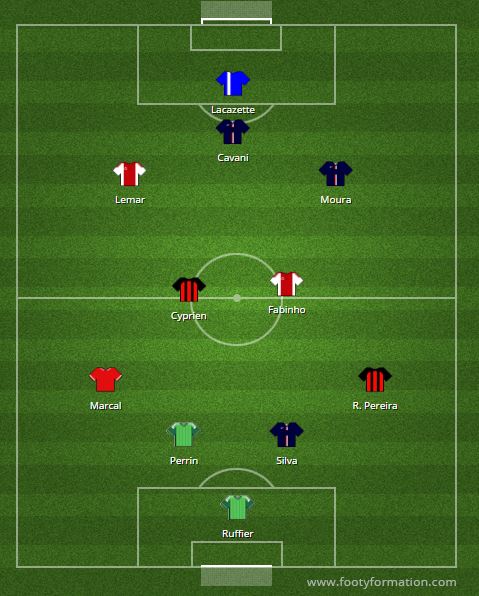