After a slow start to the season, Southampton are one of the in-form Premier League teams at the moment. Fielding a 4-2-2-2 on paper, the Saints recently picked up unexpected points against some of the league’s biggest hitters – Manchester City, Tottenham Hotspur, and Manchester United. Results in tow, Southampton’s implementation of quick and progressive attacking transitions have them climbing the league table, playing with a distinct style and groove.

As mentioned, Southampton line up in a recognizable 4-2-2-2 to 4-4-2, with changing shapes and structures depending on the phase of the game. The 4-4-2 is their most common defensive shape, with strikers staying high and ready to pounce in transition. With these basic principles generally in place, it’s important to note that as a fan of automatisms and clearly defined principles of play in each phase of the game, Ralph Hasenhuttl changes his attacking transition approach based on the area of the field, his game model, and the opposition. In other words, once possession is regained, the Saints may implement noticeably different strategies based on the area of the pitch, as they look to counter and break free of their opposition.

In their defensive third, Southampton expand and establish width, pushing players conservatively up and out to help move the ball forward. They may utilize longer passes, where their speedy strikers can chase down the ball in half-spaces, or utilize ball carriers like Oriol Romeu or Mohammed Elyounoussi to break lines on a dribble. 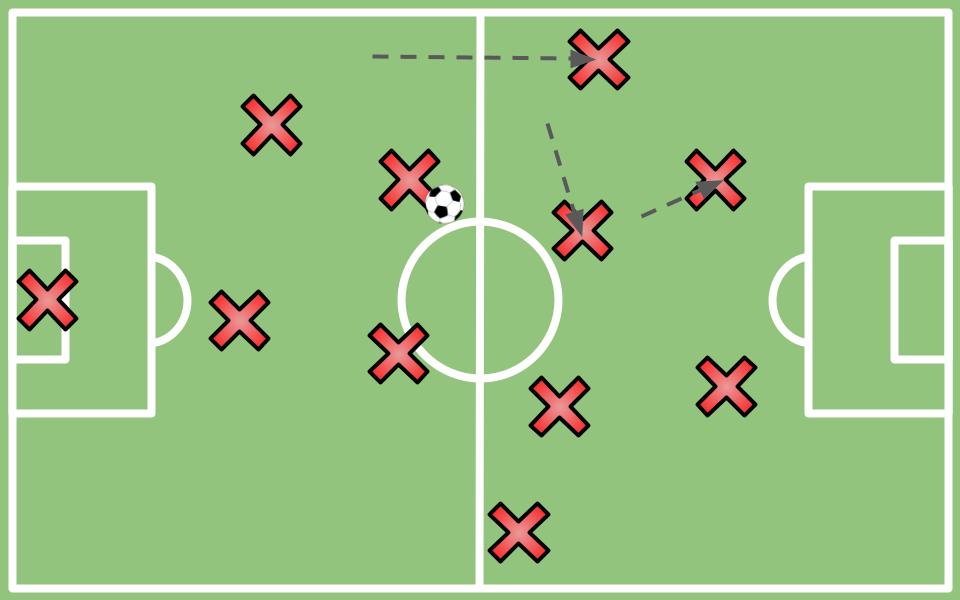 In the middle third, rotations begin to shape form, as wide midfielders tuck inside, fullbacks progress out wide, and forwards maximize depth. The central midfielders will generally position themselves with a slightly withdrawn role, understanding they still need to hold shape for potential losses of possession of their own. The Saints may be direct in utilizing looping passes over an opposition’s high-line, or play in close quarters and progress vertically up the pitch through bounce passes and positional interchanges. 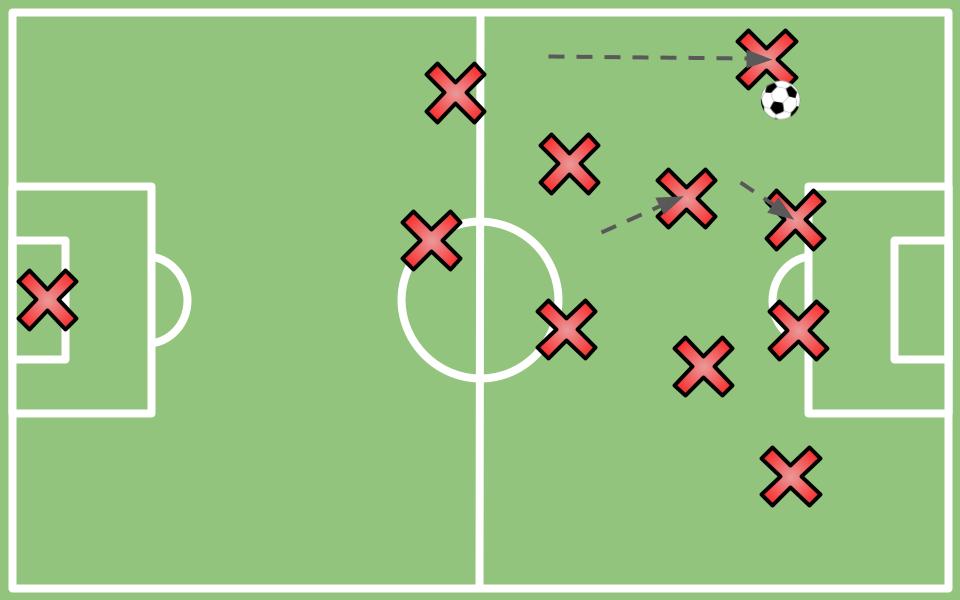 When they regain possession in the final third, long passes are no longer an option, and the team instead are looking for the quickest route to goal, with minimal passes in close combinations to work shooting angles. The entire team may shuffle across to the side where the ball has been won, with both fullbacks potentially getting up the byline into the wide areas up high. An oversimplified, numbers-only representation of this progression would be 2-4-4 to 2-2-4-2 to 2-2-2-4.

So, how does all this help Southampton compete? Here’s a few key outcomes of their described attacking transitions:

1. Forwards stay in dangerous areas. Whether for direct runs behind or for service in the box, Southampton’s front two are often found high and wide, within the width of the penalty area. In principle, this offers the dual benefit of occupying the opposition back-line through their constant counter-attacking threat, while simultaneously giving a focal point for crosses and final third combination play. The relatively focused roles and responsibilities assigned to Southampton’s forwards subsequently maximizes the efficiency and goal production from the likes of Broja and Adams in this crucial position.

2. Pre-planned rotations free up unexpected playmakers. Perhaps the most entertaining aspect of Southampton’s play is the repurposing of wide midfielders as dual number 10’s, particularly when the team are in possession of the ball. This ideology frees up space for full-backs to venture forward and get on the overlap, while providing a potential solution for the team’s lack of creativity. A lack of creative willpower can sometimes plague 4-4-2 systems, and Hasenhuttl has managed to mitigate that in recent weeks through his wide combinations, particularly in transitional moments.

3. Rhomboid adaptations help keep possession. Truthfully, the square shapes inferred by the team’s 4-2-2-2 set-up is misleading. Southampton simply could not be as effective with the ball without real-time flexibility, and positional play to match. And so, what is most easily represented as rhombi, provide perpetual evidence of each player’s individual technical ability and understanding as they make the relatively small adjustments needed for passing angles and goal creation. Near-side support paired with weak-side balance sets the stage for quick ball progression, sharpening the cutting edge of everything Southampton does so well.

So there it is! How the strategy behind Southampton’s attacking transitions vary between the different phases of the game. When analyzing any team, it’s important to denote these differentiations, and not jump to conclusions about a team’s over-arching ideology without first taking a look at the variations based on the third of the pitch. For coaches, it’s also important to make these differentiations when creating a game model, something Southampton boss Ralph Hasenhuttl will have undoubtedly done before he even arrived at St. Mary’s. Thanks for reading and see you soon!

DON’T FORGET TO CHECK OUT…

I’ve long been a defender of Sean Dyche’s intensive and defensive, “long-ball” style. But there’s perhaps no greater victory in his entire career than starting off at Everton with an absolute bang, beating the league leaders in Arsenal, who had previously only lost a single league game. Everton themselves had not won under Frank Lampard…

Luciano Spalletti has worked wonders since arriving to the scene of Naples in 2021. The Italian manager helped Napoli to a third-place finish last season, and now prepares to lead the closing stages of their title charge in 2023. With some supremely smart acquisitions in the summer working their magic, Gli Azzurri currently sit ten points…

The art of structuring an effective warm-up

Game of Numbers #11 – How to dribble like Jude Bellingham

Without Jude Bellingham, where would Borussia Dortmund be right now? They’ve been missing Marco Reus, Mats Hummels hasn’t been up to pace (literally), and all the newboys haven’t quite hit the ground running as expected (perhaps Salih Özcan aside). This has meant that Jude Bellingham has needed to carry the weight of the team on…