For the first time in over a decade, Tottenham Hotspur appeared to be absolutely doomed this season. For the first 12 games of the season, Spurs looked nowhere near their usual high-flying, Champions League finalist selves and Mauricio Pochettino had the team slipping further and further down the table. Pochettino was quite possibly the best manager Tottenham have ever had, but with the team sitting in 14th place, it was inevitable that the Argentinean’s role at the club was going to be cut short, just shy of 300 games for the club. Looking for instant stability, the boardroom went with the experienced Jose Mourinho to steer the ship back out of safety and the move has proven to be a massive success for Spurs. Since his arrival, Tottenham have won four games from five and now look to be well within touching distance of the top four again. Here is a Tactical Analysis of Jose Mourinho’s revamped and revitalized Tottenham Hotspur after his first five games in charge. 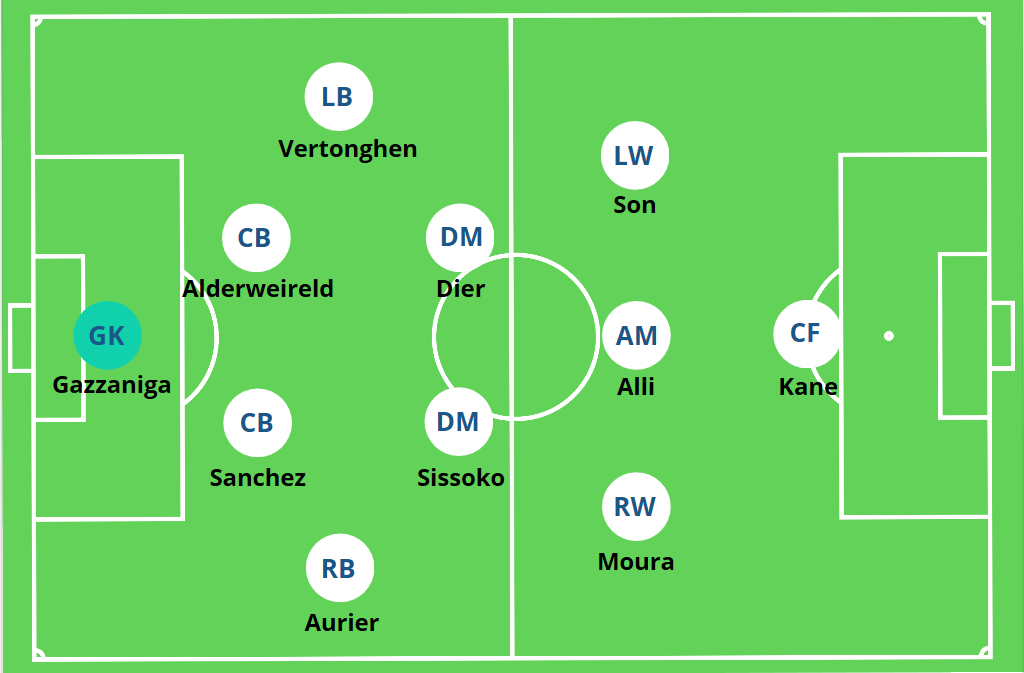 In Tottenham Hotspur, Mourinho inherited a side of extremely talented players that were not living up to the high standards they had set for themselves throughout their careers. Spurs had all the makings of a very good team and solid foundations of counter attacking and movement in between the lines already in place, which Mourinho would have been overjoyed to inherit. It’s hard to tell if Mourinho has gone more simplistic with his Tottenham Hotspur side than the former manager, or if he’s actually made things more complicated, and by making things more complicated has simplified things for the team.

Mourinho has set his Tottenham Hotspur side up in his favourite 4-2-3-1 formation. Eric Dier has come back into the fold and has been the preferred ‘number 6’ with Harry Winks and Moussa Sissoko splitting time as the ‘8’. Jan Vertonghen has been first choice left-back due to Ben Davies’ recent injury, but Mourinho has also restored faith in the brilliant ball-playing centre half Toby Alderweireld. Serge Aurier looks a completely different player with more freedom to advance forward, as does Dele Alli who is playing his best football ever at the moment. The industrious Lucas Moura and electric Heung-Min Son have occupied the wide areas while Harry Kane has operated in between the lines swapping with Dele Alli moment by moment in games.

Mourinho has a reputation for being a very defensive manager, and rightly so as he was largely responsible for breaking tiki taka football, but his Tottenham Hotspur team have been one of the most fluid attacking sides in Europe as of late, scoring 16 goals in his first five games in charge so far this season in all competitions. 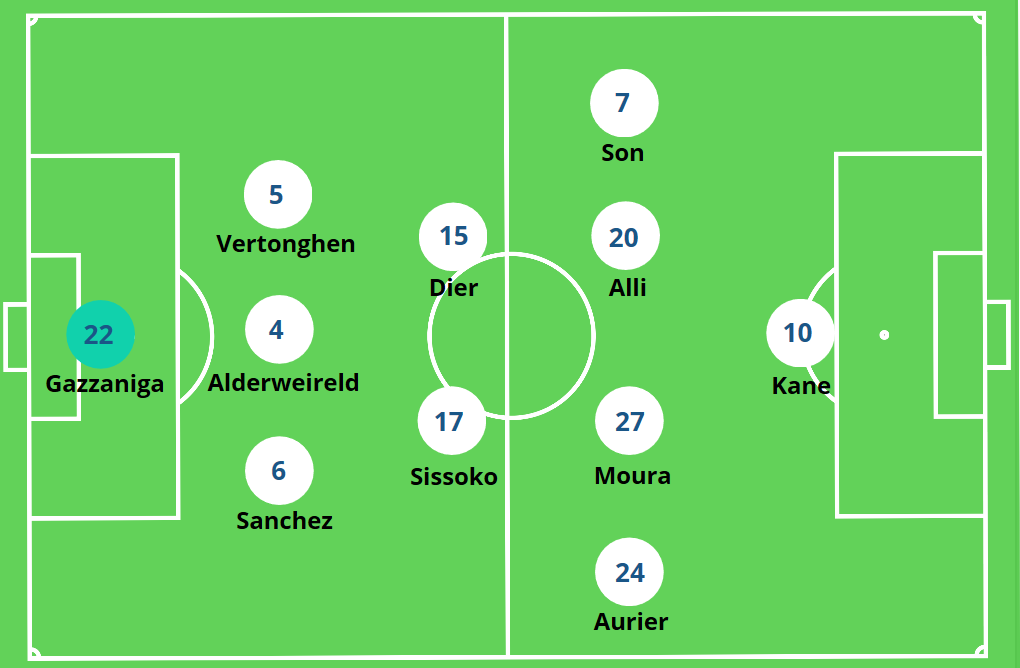 A key element to Jose Mourinho’s Tottenham Hotspur so far this season has been positional rotation of many key players on the field. Spurs’ build-up play is reliant on a back-three as Vertonghen slots in as the third-centre-back, and Aurier advances forward. Eric Dier, Moussa Sissoko, Lucas Moura and one of either Harry Kane or Dele Alli remain central, sweeping up any losses of possession before restoring the ball to the wide areas where Aurier and Son can do the damage. Despite this being one of the most predominantly discussed tactics of Spurs so far during the Mourinho era, no one’s really figured out how to combat it and Aurier and Son were both rampant at the weekend against Burnley in a 5-0 win.

Another key feature to their build-up is the exceptional passing range of Alderweireld, who attempted 13 long-ball passes against Burnley, seven of which were accurate. Davision Sanchez has also explored longer passes, attempting 10 and completing 4 against the Clarets. In Mourinho’s first game in charge, Sanchez only attempted 3 longer passes and completed 0 of them, highlighting his improvement in this regard over the past few weeks.

Spurs have kept up good possession statistics under Mourinho, but they’ve also been more direct in advancing forward, looking to play in Aurier for crosses, Son for his pace or even Alli and Kane as they look to score.

One of the most visible changes to Tottenham’s play since Mourinho’s arrival at the club is the positional interchange of Dele Alli and Harry Kane.

Alli has been a reborn man under Mourinho, scoring 4 goals with 3 assists in the first five matches this campaign with Mourinho, as compared to just 2 goals and 1 assist in the 15 matches before with Pocchettino. His revival has been so strong that there hasn’t been a single game that’s gone by that he hasn’t scored or assisted a goal for Mourinho’s team. He’s also been so stellar that he’s become absolutely un-droppable as Christian Eriksen, one of the most creative midfielders in the world, sits on the bench and waits for his chance to shine.

Key to his ability to get in on the act more often has been a free role, where he’s been allowed to drift into spaces wherever he sees fitting. Almost like a Thomas Muller “Raumdeuter”, Alli has demonstrated the uncanny ability to interpret where the space is on the field and advance into dangerous positions to either score or assist goals. One of his most frequent positions has actually been in front of Harry Kane, who has been able to get on the ball more and act as a play-maker while Alli advances forward. Not only does this interchange help Dele Alli to score more goals, it’s also aided in Harry Kane’s ability to pick up the ball in deeper positions and have a more creative role, which he’s always been capable of. The goal-scoring centre-forward also typically favours shots from deep, and so being in a deeper position has helped him take on more of these long shots more often.

DOUBLE PIVOT OF DIER AND SISSOKO/WINKS

One of Mourinho’s smartest moves since his arrival at Tottenham has been restoring Eric Dier to the starting lineup in place of Tanguy N’Dombele. N’Dombele has a bright future ahead of him and is a very good player, but once upon a time Eric Dier established himself as one of the best defensive midfielders in the world, garnering interest from Manchester United (when Mourinho was there) and Bayern Munich in the process. Dier’s positional awareness is second to none in Spurs’ lineup and despite having the robust build of a ball-winning centre-half, he’s also one of the best passers of the ball Tottenham have at their disposal. With his presence and leadership on the field, Tottenham have been organized, disciplined, and more creative going forward. Dier’s best days at Tottenham were when he was part of a double-pivot with silky dribbler Moussa Dembele and Mourinho has now restored that with Harry Winks who has many similar qualities to Dembele. But offering something very different is Moussa Sissoko who seems to know exactly the right moment to make a lung-bursting run forward, whether it be on the ball or off the ball. Dier is perfectly comfortable sitting in and recovering possession or delaying attacks when Tottenham become exposed, giving license to Sissoko to go on his lung-bursting runs. Both of Sissoko’s goals this season have come in the last three matches, and that is completely unsurprising given the role he has been allowed to have with Dier back in the lineup.

Overall, Jose Mourinho has made intelligent but extravagant tweaks to an already fantastic team of players that before he came in were horribly underperforming. The freedom he has given to his attack-minded players to roam around and engage in positional rotation has made for one of the most fluid, top goal-scoring teams in the league as Tottenham become one of the most feared teams around again. Wherever Mourinho has gone he has always won trophies and now he is looking to do what Pocchettino couldn’t and bring some silverware to Tottenham Hotspur.

Thanks for reading and see you soon!

Be sure to check out more from this series below…