“Win your individual battles”. This is the mantra of a manager employing man-on-man marking. Win the battle on restarts, when isolated, and with or without the ball. This is because 1v1 success inevitably increases the likelihood of 11v11 victory. And so, paired with each tactical posturing is this personal pursuit. With the many dynamic, dribbling attackers and foul-catching cameras in the modern era, sometimes these 1v1 situations in dangerous areas are seen as a shortcoming or an ill-advised 50:50 from the defending side. Seemingly, to a certain extent, AC Milan and Inter Milan beg to differ.

During their recent Serie A match at San Siro, the two teams employed distinctly different formations (specifically, AC Milan lined up in a 4-2-3-1 while Inter opted for a 3-5-2), which positioned players in similar spaces and set the stage for pitch-wide 1v1s. Whoever could force their opponent out of shape by the pass, dribble, or run was sure to gain the upper hand. 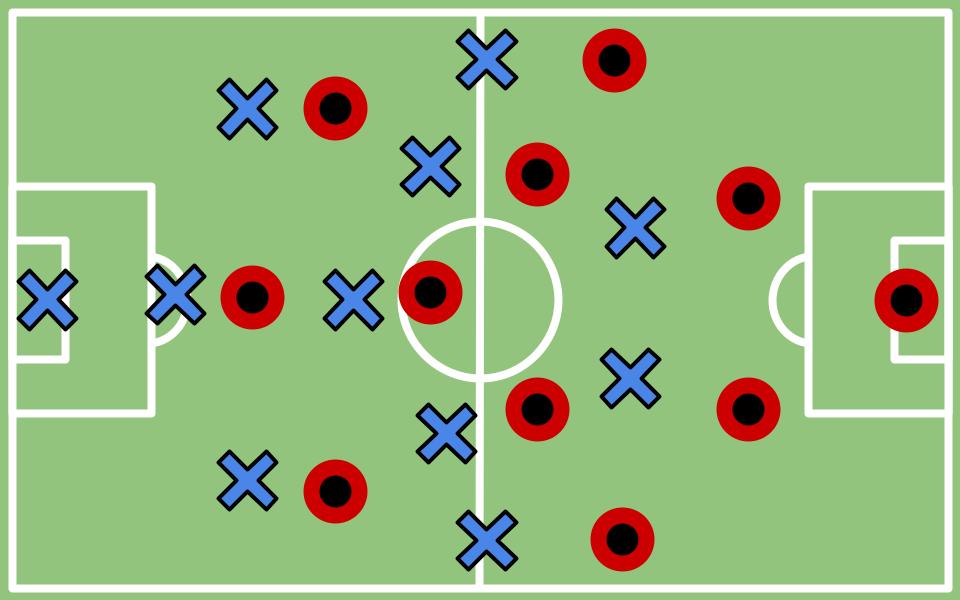 In actuality, the two sides’ unique tactical preferences mitigated some of the man-on-man opportunities. Inter characteristically sat slightly deeper, looking to capitalize on changes in possession and counter with pace. AC Milan sought to work the ball side-to-side, breaking lines with a pass into an attacking player when space was found. Despite these key differences, players from front to back on both sides could be seen following their mark closely, with a heavy reliance on the defensive midfielders to shield their center backs from direct passing and dribbling pressure.

In the end, this tight game, like so many before it, was decided by two key dead-ball situations. But the energy and excitement spanned the ninety minutes, exhibited in innumerable 1v1 moments between two of the top teams in European football. The takeaway? When teams line up in juxtaposition, fans are in for a treat.

Taking the world by storm in 2022-23, Khvicha Kvaratskhelia has come from relative obscurity to join one of Europe’s most famous clubs, and now leads their charge toward the top of Serie A. The direct and dynamic wing wizard has been in remarkable form since joining Napoli from Rubin Kazan, contributing to 5 goals in his 7 matches so far this campaign, already close to bettering his tally from 2021-22 in Russia. Here is our analysis of the remarkable rise of Khvicha Kvaratskhelia this season.

At the start of the 2022 CANPL season, Woobens Pacius appeared to have lost his place at the top of Forge FC’s attack. The Hammers had brought in Pacific icon Terran Campbell, who had haunted Forge among many other Canadian Premier League teams en route to Pacific’s Playoff victory in 2021. But Forge’s attack didn’t fully click in the opening weeks of the season, and they struggled to find the right chemistry, particularly with Campbell’s desire to engage lower on the pitch and support the play. In came Woobens Pacius to restore faith to Forge’s fervid attack, and the Hammers immediately went on a stunning run of form.

Unlike their name might imply, ‘Inverted Wingers’ are far more than just wingers that cut or drift inside. That is only one small part of an overarching role that prioritizes playmaking in the final third, and dynamically linking play between the other members of the front-line. The best of the art will often post high numbers in goals and assists, but ‘Inverted Wingers’ need to be so much more than just creative goal-scorers – generally tasked with creating space, rotating with teammates, and moving off the ball to exploit the half-spaces at the right moments.