After two successful years with Red Bull Salzburg, German coach Marco Rose made a return to his home country to take on the role as Borussia Monchgengladbach manager for the start of the 2019-20 season. Rose has continued his success with Gladbach so far since taking charge and has only enhanced his reputation as a manager, with 50% of his matches won and his team well within the hunt for the top for again. Under Dieter Hecking, Gladbach had a win percentage of 43%, and played primarily in a 4-4-2 Diamond or 4-3-1-2 shape. Rose has since changed Gladbach’s formation to primarily a 4-2-3-1, focusing more on quick transitions and the importance of fullbacks in build-up phases. His side haven’t been spectacular this season, but they’ve been missing a few key figureheads and at the very least have continued to play some fantastic football. Now that Rose looks prepared to take over at Borussia Dortmund in time for next season, we take an in-depth look at the tactics he’s deployed in 2020-21. Here is our updated 2020-21 tactical analysis of Borussia Monchengladbach under Marco Rose. 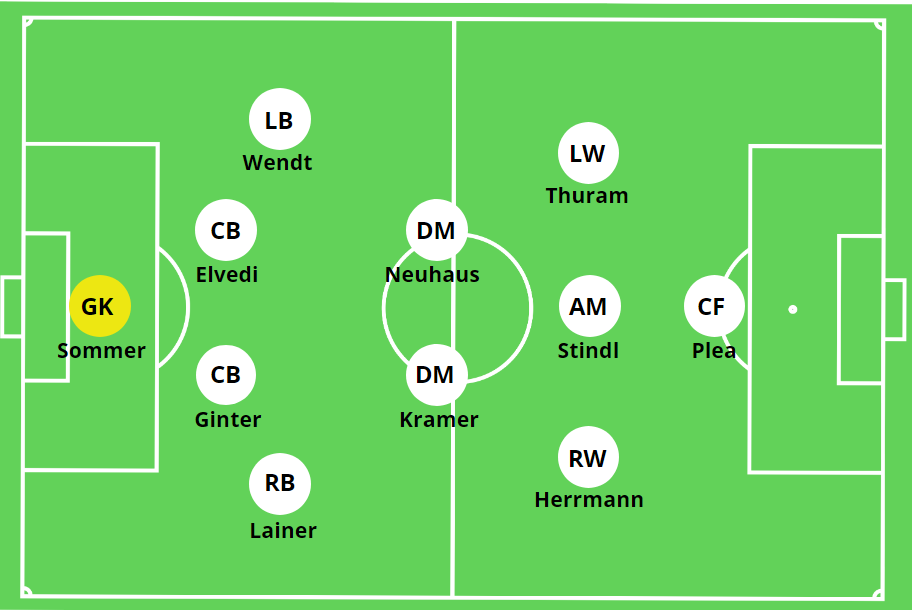 Although chopping and changing his formation around frequently in the past, Marco Rose has stuck very true to a 4-2-3-1 system this season. Like most 4-2-3-1’s, Rose urges his fullbacks to advance with the play and become focal points in attack. Luckily, Rose has three fantastic players for the role in Stefan Lainer, Ramy Bensebaini and Oscar Wendt. Conveniently, Lainer was a key figurehead of Salzburg’s lineup throughout Rose’s time at the Austrian club and the player and manager have a great understanding. A future Dortmund player? Probably not, even despite how much Dortmund could do with a new right-back. But perhaps a few others could make the step up with the manager when he eventually departs.

Starting in goal, Yann Sommer has been nearly irreplaceable in his two seasons under Rose, missing just one match between both this season and last in the league. Him missing a game means that Matthias Ginter is the only member of the squad to play every single minute this season, continuing to be a crucial member of Gladbach’s back-line. He’s been partnered most often with the Swiss international Nico Elvedi, along with Stefan Lainer at fullback, who has also featured in every single game. 35-year old Swedish international Oscar Wendt continues to battle the Algerian Ramy Bensebaini for a place but this might be the last season he is truly able to contend for the left-back role, especially given how well Bensebaini has done in his stead.

In front of the back-four, Denis Zakaria has been unfortunate to miss most of the season so far, especially given all of the transfer talk pertaining to the likes of Arsenal and Manchester City before the season began. Florian Neuhaus has however performed well in his place, acting as more of a goal threat and providing extra creativity for the side in attack. Christoph Kramer has continued his place in the midfield pair, performing the more defensive role between the two. The attacking midfield trio has seen the most rotation as you might expect, with seven different players battling for a place. The only one who’s struggled to maintain the same heights as last season in the Slovenian László Bénes, who’s gone from a regular in the side to a peripheral player. One of the main reasons for that shift is the return of Lars Stindl, the captain of the team and the most regular number ten in the side. Jonas Hoffmann, Hannes Wolf and Breel Embolo have all had their moments, but Rose might still prefer Patrick Herrmann and Marcus Thuram on the right and left respectively. Alassane Plea has also been a regular up front, with Thuram and Embolo operating as back-up number nines. Perhaps where Gladbach have struggled the most season is in their ability to find the back of the net, which makes it even more understandable why Rose has changed personnel so often. Thuram and Plea netted a combined twenty goals last season, but together they have only bagged six so far more than halfway through 2020-21. They’ve instead had to rely on Lars Stindl for goals, and the German has delivered to an extent with nine in his twenty-one appearances. So those are the players, now let’s get into more about how exactly Marco Rose sets his team up to play and what he might bring to the Black & Yellows.

Monchengladbach have been associated with a quick transition mentality, as Marco Rose implemented during his time at Salzburg. But Gladbach still utilize methods of playing out from the back when possible, with only Sommer and Ginter attempting a significant amount of long passes per game. The fullbacks are particularly important in this methodology, as they attempt to play through wider channels rather than central ones when playing out from the back. In particular, Christoph Kramer and Stefan Lainer frequently link up to provide forward passes into the right winger. Gladbach use the right side in their attack 39% of the time, while also adopting the third most vertical approach in the league (29%). This means that quick attacking transitions and playing through the middle are still important to Rose, but not as much as the manager might have tried to do at Salzburg.

During build-up phases, Ginter and Elvedi are also important to maintaining possession, stretching the field with reasonably wide positions as the fullbacks get higher and the central midfielders come deeper to pick up the ball and form a central square by which they can use to advance the ball into the wide areas. When the team operate in a back-three, the role of the wing-backs becomes even more important as the wide forwards (if any are in the team) will play more inverted and look to combine in central areas.

PRESSING FROM THE FRONT

Gladbach have continued the same pressing principles in the 4-2-3-1 formation as they had in their 4-4-2 diamond (4-3-1-2) previously under Dieter Hecking. The attacking midfielder and striker work in tandem to stop the opposition from being able to play out from the back, as the wingers come close together and attempt to shut down wide spaces. This can take the form of a 4-2-2-2 shape with Stindl joining alongside the striker, or more 4-2-3-1 as he remains withdrawn and tries to stop the opposition’s number six from receiving the ball. The pressing system utilized also appears to be more man-oriented rather than space or ball oriented like Red Bull Salzburg. For example in moments where the opposition goalkeeper has the ball, the striker may press the keeper, the wingers may cover the centre-backs and the number ten will cover the opposition’s defensive midfielder. But the press goes far beyond just the front four to include the midfield two and the fullbacks. The fullbacks will frequently line themselves up with the opposition fullbacks in order to eliminate the option for longer balls or forward passes in the wide areas, as the defensive midfielders will usually engage with opposition central midfielders.

Interestingly for Marco Rose, instead of forcing his opposition back toward their own goal or to the middle of the pitch like Salzburg, Monchengladbach have a strong desire to force their opposition into wide areas, where they are set up well to win back possession and engage their fullbacks in the attack. Gladbach’s press is also particularly aggressive. Although they have kept the fifth most amount of possession in the league this season (52%), they’ve also made the fifth most interceptions per game. This emphasizes that even when they don’t have the ball, they look to win it back and go on the attack right away. This is all part of their quickness in transition.

As seems to be customary of former and current Salzburg managers these days, Monchengladbach place a heavy emphasis on quick transitions in both attack and defense. transitional moments. Immediately after winning the ball they look to utilize short vertical passes or a capable ball carrier to bring the ball up the pitch. Their dribbling power has diminished from last season, particularly with the likes of Thuram, Herrmann and Plea spending more time on the bench. They’ve continued their verticality instead with an even heavier emphasis on quick, short passes instead. The interchange of the front four can also become very important when Gladbach play on the counter. As the striker makes a run into a wide area to create space, the right winger may simultaneously drift inside to create chaos for the opposition. Plea and Thuram are particularly comfortable with this kind of interchange, which again Gladbach haven’t seen as much of this season. This type of approach also requires ball-winning central midfielders and fullbacks to allow the team the ability to constant stop their opposition and go again. Although Kramer sits in the top twenty in the league for tackles per game (2.1), they’ve really missed Denis Zakaria this season. Neuhaus is more of a creative, possession-based midfielder who likes to take shots from distance, so he has his advantages to the side as well. But Zakaria is so key to the way they play in both carrying the ball forwards for greater distances, and winning the ball back through tackles and interceptions when they’re out of possession. Finally, despite this emphasis on quick transitions, counter attacking is not necessarily a method of many goals for Die Borussen. It is however a fundamental aspect of their play in quickly opening up space for their forward players to express themselves in attacking areas.

Although Borussia Monchengladbach have lost a bit of traction in the race for the top four, Marco Rose’s team are still playing some great, tactically intriguing football. The emphasis on transitional moments and pressing from the front have been mainstays in both of Rose’s two seasons at the club, and he now appears to be following Lucien Favre’s footsteps as another manager to leave Gladbach for Dortmund. How this will affect Die Borussen for the remainder of the season remains to be seen, but at the very least, Borussia Dortmund fans finally have something to be excited about again.

So there it is! A tactical analysis of Marco Rose’s 4-2-3-1 formation and tactics with Borussia Monchengladbach this season. Do you think Rose is the right man for Dortmund? Share your thoughts on Twitter @mastermindsite or in the comments below. Also be sure to check out more of our Tactical Analyses, and Bundesliga articles. Thanks for reading and see you soon!

Why Erling Haaland is perfect for Manchester City

What Nico Schlotterbeck will bring to Borussia Dortmund