The upcoming set of World Cup 2018 qualifiers are just around the corner with England preparing to take on Lithuania on March 26th after a tough test against Germany in a friendly on March 22nd.

The Three Lions have a few injury concerns at the moment in the form of Jordan Henderson who has a foot problem and Danny Rose with a long-term knee injury, but should have limited difficulty replacing those two in their squad. Here is The Mastermind‘s choice for England’s 23-man squad for their upcoming fixtures at the end of the month.

He may be playing in Italy but he still has to be England’s number one without question. It’s no secret that Manchester City have missed him dearly this season with both Bravo and Caballero horribly under-performing. Torino meanwhile are having a good season and have lost only once in their last five matches. Joe Hart has always played an important part for the Maroons this season, making nearly 3 saves per game.

The shot stopping goalkeeping hero has won several points for his side this season and has even made more saves than any other keeper in Europe’s top 5 leagues in 2016-17. Burnley also sit in 12th place thanks to the heroic efforts from their captain this season.

The future of England goalkeeping without a doubt. Jordan Pickford definitely deserves his chance to shine in England’s squad after impressing all season long for a Sunderland side that would already be relegated without him.

England’s best defender. Kyle Walker is having another superb season at Tottenham Hotspur and has even attracted the interest of FC Barcelona. He should be one of the first names that Gareth Southgate gives the call to.

Clyne has been an important part of Jurgen Klopp’s hard-working Liverpool side this season and is still England’s second choice right-back.

Has been revived under Antonio Conte at Chelsea this season after poor performances last year for club and country. He’s played all but six minutes for the Blues this season, scoring three goals from 27 appearances and captaining Conte’s team to 13 clean sheets.

Smalling hasn’t featured prominently for Jose Mourinho’s side this season but has always been up to the task when given his chance. He even made The Mastermind‘s February Team of the Month. The United defender should slot right into the team regardless of his playing time.

Keane has been Burnley’s MVP this season and has established himself as one of England’s brightest defenders in the process. He’s led Burnley to a string of impressive results as they sit comfortably above relegation in 12th place right now.

Baines has been superb for Eveton in recent months as the Toffees have gone unbeaten in the Premier League since the start of the year. The Everton defender has scored 2 goals with 2 assists from 21 matches this season while also impressing in defense with 2.3 tackles per game. With Danny Rose out injured, now is the perfect time to reintroduce Leighton Baines back into England’s squad.

One of England’s most underrated players, Ryan Bertrand should be playing for one of the country’s top teams by now (Arsenal could sure use a new left-back). This season hasn’t been Bertrand’s best, but he’s still consistently been one of Southampton’s best performers.

Other than a minor hiccup in the Europa League, Dele Alli has been absolutely sublime for Tottenham Hotspur this season, scoring 13 goals from 26 matches! The Tottenham man can play a number of different positions and will be the first name that Southgate puts on his list.

He’s been playing as a defender all season long for Tottenham Hotspur and hasn’t performed great in recent months as Tottenham have crashed out of the Europa League, but with Jordan Henderson out injured, Eric Dier will be crucial to England’s midfield this month.

Lallana has been one of Jurgen Klopp’s star performers this season, coming to life as a right-sided central midfielder. He’s also often been England’s key man this season like when he fired them ahead against Slovakia in September and running the show last time out against Scotland in November. The Liverpool midfielder will likely prove to be England’s key man again at the end of the month.

Sterling has been superb in Manchester City’s magnificent run of form in recent months and has linked up excellently well with Silva and Sane since the turn of the year. 9 goals and 11 assists in 35 matches (all competitions) is a fantastic achievement for any player.

Drinkwater has been key to Leicester’s recent run of form under Craig Shakespeare and also impressively bossed the final 30 minutes of Leicester’s Champions League encounter against Sevilla. Calm and composed in possession of the football, Drinkwater is terribly underrated by England’s managerial team and deserves to be given his chance in their unstable midfield.

Barkley has been excellent in Everton’s recent run of form as the Toffees are still unbeaten in the league in 2017. He stood out above nearly every other Premier League player in the league in February on his way to making The Mastermind‘s February Team of the Month  and fully deserves to be given a recall to England by Gareth Southgate.

Michail Antonio is so deadly in front of goal. He can play on either wing, as a fullback, and even as a centre forward; playing to equal affect regardless of his position and still managing to find the back of the net on 9 occasions from 25 matches this season.

Hasn’t seen a lot of action in recent months but came up big in Manchester United’s FA Cup triumph over Southampton. Still only 24 and can gain a lot out of the experience while at the same time giving England something different that only a few other players in the squad can provide.

Harry Kane always knows where the back of the net is and hopefully should be able to carry over his incredible form in the Premier League over to England’s qualifier against Lithuania. He was named the Premier League Player of the Month for February for his performances and it would be outrageous if he’s not England’s starting centre forward in both matches.

Jamie Vardy hasn’t had the best of times this season but has looked good in recent matches and is beginning to show signs that he may have found his mojo again. With his pace, power and natural ability to finish off chances, England need him in their squad if not their starting 11.

Still a fantastic leader in the England dressing room and can play an important part if given the chance. He was excellent in England’s 2-0 win against Malta in October and his influence around the team can still be absolutely critical even if his performances for Manchester United have begun to waiver this season.

Deeney has deserved his chance to be called up to England’s national squad ever since Watford re-entered the Premier League last season. He’s 28 years old now but with 9 goals and 3 assists in 27 matches this season is still one of the Premier League’s top scoring English strikers. He bullies defenders, is great in the air and could give England a different look from off the bench.

Rashford hasn’t performed to the same level that he managed last season and to be fair hasn’t been given enough of an opportunity under Jose Mourinho this season. That being said, he’s still only 19 and with the promise that he brings to England for the future, he needs to continue to be given his chance to play in the present.

Injuries always come up so Alex Oxlade-Chamberlain should be given his chance to come into the squad if someone should have to drop out. Ox still can’t break into Wenger’s squad but has looked impressive when he’s been given his chance and offers a lot of pace and energy to England’s squad.

Mediocrity should not be rewarded. John Stones has not had a good season and needs this kind of motivation to get back to his best.

Why should a player who never even plays for his club side be given a place as England’s starting centre forward? If England want another striker, play Michail Antonio up front, he loves a goal!

Walcott hasn’t performed to his best this season and England have plenty of other options in wide areas that they can call upon. 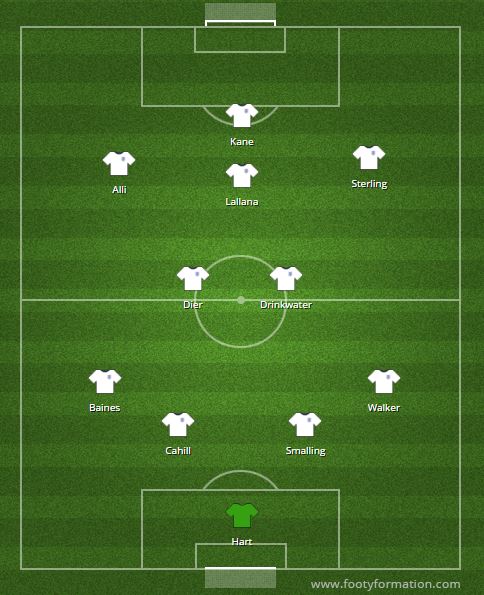 Eric Dier needs another defensive-midfielder to partner him in defensive midfield while Adam Lallana should play through the middle and Alli off of the left. Leighton Baines should also start in place of Danny Rose and ahead of Ryan Bertrand. 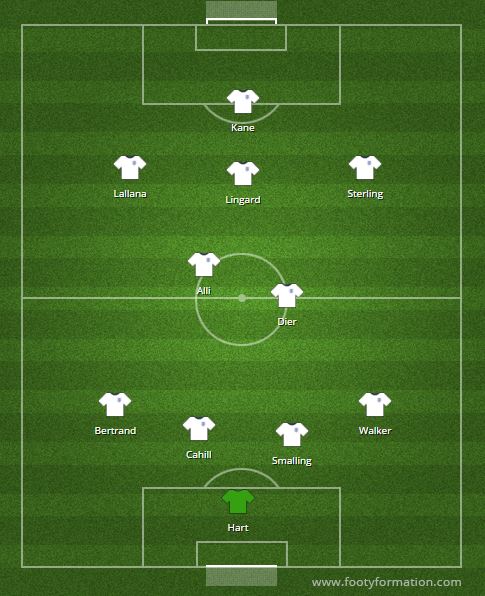 Gareth Southgate is a massive fan of Jessie Lingard and is likely to start him as England’s number 10. This would push Alli into central midfield and Adam Lallana to the left where he operated against Slovakia. Ryan Bertrand will also start instead of Leighton Baines to fill in the void left by Danny Rose.

So there it is! The Mastermind‘s 23-man squad for England’s upcoming World Cup qualifying fixture against Lithuania. Let’s hope The Three Lions can continue their unbeaten run in the competition and also come up with a surprise result against Germany! See you next time!