The opening matchday of the 2016-17 Barclays Premier League season did not disappoint on any front. We saw fantastic goals, shock results, new faces and some very impressive performances from several players. Here are the top 11 players from Gameweek 1!

Ben Foster had a superb opening game against Crystal Palace as he was one of West Brom’s supreme performers in their 1-0 victory. Foster made 5 stunning saves to stop Palace from scoring. Seriously, all five of these saves were stunning. He also claimed 100% of crosses that came his way to help preserve his clean sheet and picked up the man of the match award in the process, helping West Brom claim an opening day victory. Rating 8/10.

Swansea went into this match a little shorthanded with a few key members injured and a few more having recently been transferred away from the club. But after a stellar defensive display, they managed to scrape out an opening day win away from home at Burnley. At the heart of that wonderful defensive display was Kyle Naughton. Naughton was excellent at right back, making 6 tackles, 4 interceptions and 4 clearances to help Swansea keep a clean sheet and manage a narrow 1-0 win. He was also a constant presence in the match, touching the ball 79 times, more than any other player on the field. Naughton had an excellent opening day performance and was one of Swansea’s key men in their 1-0 win. Rating: 8.5/10.

Curtis Davies was a beast at the back for Hull, helping them secure a surprise win over Champions Leicester City. Nobody expected Hull to defeat Leicester but with a fantastic leader at the back in Davies, they always had a chance to grab three points. The Hull City centre half was fantastic, making 8 interceptions and 15 clearances to keep Vardy and co away from the net. The British defender won everything in the air, tamed Vardy and Musa and was always on the ball and on top of his game. Rating: 8.5/10.

With pace, power, energy, non-stop running and fantastic defensive awareness, George Friend illustrated exactly why he and the rest of his Middlesbrough teammates are good enough to play at this level. Friend was fantastic for Boro, especially in the first 65 minutes of the match when they were in cruise control over Stoke City. He completed 5 dribbles, was a constant threat going forward, was so tough to get past in defense and made Shaqiri look absolutely anonymous for the first 65 minutes of the game. Brilliant performance from George Friend in his Premier League debut. Rating: 8/10.

Don’t be fooled into slotting him into your fantasy team straight away, but Etienne Capoue racked up the fantasy Premier League points this week with a brilliant display and goal against Southampton. The French midfielder opened the scoring with a fantastic volley and then did a fantastic defensive job for Walter Mazzarri’s team for the rest of the game. Capoue made 6 tackles and 3 interceptions to help stop an impressive Southampton side from finding a rhythm. Etienne Capoue had an excellent opening game and although very early to call, he may be one of Watford’s most important players this season. Rating 9/10.

With all of Swansea’s recent transactions and the key members to their squad that they have lost in the past week, someone had to step up in their first match to help them get a win. Leroy Fer was that man to step up, as he dominated the midfield, was all over the pitch helping out in both defense and attack and of course scoring the winning and only goal of the match to give Swansea an opening day 1-0 victory. On top of his goal, Fer also won 6 aerial duels, made 2 tackles, 5 interceptions and 3 clearances to help Swansea keep that clean sheet. It was a fantastic performance from Leroy Fer in all areas of the pitch. Rating: 9/10.

Liverpool scored four goals against Arsenal! Four! One of the main reasons why, beyond the brilliance of Philippe Coutinho was Senegalse midfielder Sadio Mane. Mane did it all against Arsenal, offensively and defensively. He completed more dribbles than any other player on the pitch with 4, shockingly made more tackles than any other player on the pitch with 6, completed 93% of his passes, a higher ratio than any other starting player on the field and scored a fantastic, stunning goal that ended up being the game winner! Besides maybe beating his own Premier League record for fastest hat-trick ever I don’t think Sadio Mane could have asked for a better Premier League debut with his new club. Rating: 9/10.

Robert Snodgrass was Hull’s surprise performer as they shocked the Champions with a 2-1 victory that nobody, not even Hull City fans, saw coming. Snodgrass was a constant threat going forward and of course scored a fantastic goal to win Hull the match. Beyond that he also made 4 tackles, more than any other Hull player, created 2 chances and had 5 shots, one of which was converted for the game winning goal. Snodgrass was the difference between Hull drawing their opening match and winning it and as a result definitely deserves his place in the Team of the Week. Rating: 8.5/10.

Gaston Ramirez ran the show for Middlesbrough against Stoke City and earned himself a crucial opening day assist for Alvaro Negredo’s early goal. He also could have scored twice himself, striking the woodwork on two different occasions! The Uruguayan midfielder also created 3 chances, helped out in defense with 2 tackles and 3 interceptions and was only dispossessed 1 time the entire match. Without Gaston Ramirez, Middlesbrough surely would not have been as dominant as they were in their opening match against the Potters. Rating: 8.5/10.

Philippe Coutinho put in a masterclass of a performance against Arsenal, carrying his side to victory by scoring two magical goals and always being the difference maker in the final third of the pitch for Liverpool. The Brazilian was involved in every one of Liverpool’s attacks and was highly influential throughout the match. Not only did he get the Reds level at half time, but he also scored a fantastic goal to give his side a 3-1 lead before Sadio Mane made it 4-1 later on. Moreover, his touch to set Georginio Wijnaldum free on what became Adam Lallana’s goal was also incredible and when his legs cramped up and he had to come off in the 70th minute, Liverpool weren’t the same team and struggled to keep the pressure on Arsenal for the remainder of the match. In his amazing performance, Coutinho also created 2 chances and had 3 shots, all 3 of which were on target, and 2 of which found the back of the net. Without Philippe Coutinho, Liverpool would not have beaten a very poor Arsenal side. Rating 9.5/10.

The pressure was on Chelsea to perform in their first Premier League match under Antonio Conte, and they delivered fantastically thanks in large part to a wonderful performance from Diego Costa. Costa gave everything in this match to help his team win. He was up and back, left and right, side to side, all over the pitch and all over West Ham’s centre halves, never letting them breathe. He always allowed Chelsea to keep all the pressure on the Hammers at all times by being that first line of defense. On top of all his running and work ethic, Costa also scored the winning goal of the match to give Conte a winning start as Chelsea manager. Rating 8/10. 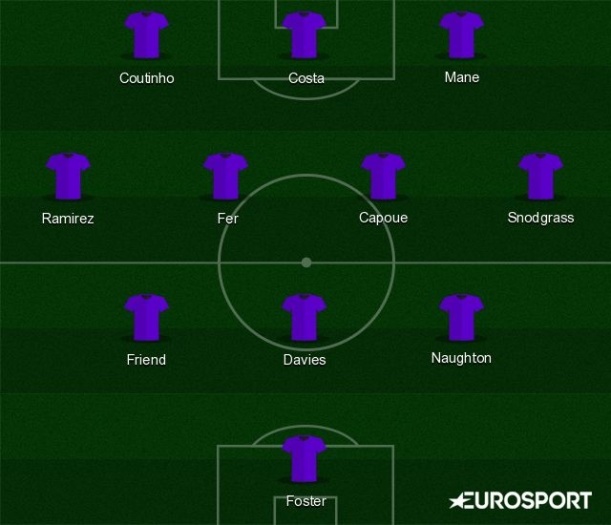 With Conte, Klopp and Guardiola all in the league at the same time, we are bound to see some crazy formations this year, so why not go with a crazy 3-6-1 to celebrate the debuts of several fantastic managers in the Premier League.

Player of the Week: Philippe Coutinho

Coutinho put in a magical performance in Liverpool’s opening match against Arsenal, scoring two fantastic goals, giving an incredible 110% effort and being the main difference between Klopp’s side and Arsene Wenger’s very, very poor side. But even though Wenger’s side were poor, they still could have easily won the match had it not been for this fantastic Brazilian midfielder.

Manager of the Week: Mike Phelan

Has to be Mike Phelan. Nobody expected Hull City to win their opening match against Leicester City. In fact everyone expected Hull to get absolutely battered by Leicester and lose quite comfortably after their miserable pre-season. Despite losing arguably their star attacker, losing their manager, and not signing a single player in the summer transfer window, Phelan managed to rally his team and come out of the gates flying to help his side earn a stunning 2-1 victory.

Recency bias? Perhaps, but what a cracking game it was. Action, excitement, strange managerial decisions, controversial refereeing decisions, and fantastic goals, this match had it all. In the first half Chelsea dominated but West Ham still managed to keep the score at 0-0. In the second half a mistake by Michail Antonio quickly allowed Chelsea to take the lead by the foot of Eden Hazard. West Ham continued to struggle to get into the match for the remainder of the second half, but fortunately found a way back into it eventually by the foot of James Collins. Just when it looked like the match would end 1-1, Diego Costa fired home a winner for Antonio Conte’s side right at the death of the game. Chelsea-West Ham was a fantastic game of football and a great way to end Gameweek 1!