Lukasz Fabianski was brilliant against Switzerland and was the reason Poland were able to get to penalty kicks. The Polish goalkeeper made some crucial saves to keep Poland in the match. In fact, he made seven stunning saves to help Poland stay level at 1-1. For Fabianski and his saves though, it wasn’t just about quantity, it was about quality. He stopped Derdiyok with an amazingly strong right hand and saved a beautiful Ricardo Rodriguez free kick in the second half (pictured above). He also had 66 touches, 3 more than Polish captain Robert Lewandowski. Fabianski was brilliant against Switzerland on Saturday and without him they may not have won the game. Rating 8.5/10.

James Chester was the best player on the pitch in Wales’ 1-0 win over Northern Ireland. The Hull City defender was defensively solid all game long helping Wales keep a clean sheet and advance to the quarter finals. He won a fantastic seven tackles, had 82 touches, made 67 passes, and 4 clearances to help Wales progress to the next round. Chester was excellent for Wales and without him, they may not have been as defensively strong. Rating 8.5/10.

Ragnar Sigurdsson was absolutely on top of his game against England and was man of the match by a mile. The Icelandic defender was full of heart, leadership and determination at the back of Iceland’s defense, doing everything he could to win his team the match. The 30 year old equalized for his country with a brilliantly taken goal only a minute and a half after Rooney had opened the scoring for England. He then defended like his life depended on it for rest of the game, winning 4 aerial duels, making 5 interceptions, 10 clearances, and 3 fantastic tackles including one absolutely incredible goal saving tackle on Jamie Vardy. Ragnar Sigurdsson was absolutely incredible for Iceland against England and was their key man in a resilient defensive performance that sent them through to the quarter finals. Rating 9.5/10.

Giorgio Chiellini was Italy’s key player in their fantastic tactical masterclass of a performance against Spain. The Juve defender opened the scoring early on and then was defensively resolute for the remainder of the game. Chiellini won 100% of the tackles he made, intercepted 3 passes, made 3 clearances and won 2 duels in the air to help Italy keep a clean sheet and stop a tough to beat Spain side from scoring. Giorgio Chiellini was brilliant against Spain and scored the vital goal that helped Italy sit back and control the rest of the game, where they were able to go on and advance to the quarter finals. Rating 8.5/10.

Radja Nainggolan was a fantastic performer in Belgium’s 4-0 win. The Roma midfielder dominated central midfield, completing 86% of his passes, winning 100% of his aerial duels, making 4 tackles, creating 3 chances and assisting Ferreira-Carrasco’s goal. He was up and back all game long, so good in both attack and defense and was so incredibly key in Belgium’s 4-0 win. Rating 8.5/10.

The scorer of Poland’s opening goal against Switzerland was incredible on Saturday afternoon, helping Poland advance to the next round on penalties. Jakub Blaszcykowski was all over the pitch, helping out in defense with seven stunning tackles and helping out in attack with 2 shots, 1 goal, 4 crosses and 4 chances created. The Polish winger was crucial in both attack and defense for Poland and without him they may have struggled to win their match and make it to the next round. Rating 9.5/10.

Two-assist Kevin de Bruyne put in another fantastic Euro 2016 performance on Sunday night, this time against Hungary in a 4-0 Belgium win. De Bruyne was one of Belgium’s most key players in attack as they were absolutely ruthless. He put in a fantastic ball from a free kick on to the head of Toby Alderweireld to open the scoring early on in the 10th minute and then capped off his brilliant performance with another assist late on, sending Eden Hazard free in the 79th minute for his goal. De Bruyne had seven shots on the night, five of which were saved by the goalkeeper and he also whipped in 10 crosses, just constantly creating chances for his teammates to score. The Manchester City midfielder was brilliant on Sunday night and was one of Belgium’s most lethal attackers as they now enter the quarter finals looking as good as anyone. Rating 9.5/10.

Germany’s man of the match on Sunday, Julian Draxler was excellent in his nation’s 3-0 win over Slovakia and filled the boots of Marco Reus perfectly. The Wolfsburg winger completed eight dribbles, assisted Mario Gomez for a great team goal to give Germany a 2-0 lead and then scored a great goal himself to finish Slovakia off and make the score 3-0. The 22 year old had a massive impact on Germany’s 3-0 win and was arguably their key man on the day. Rating 9.5/10.

I’ve never heard a commentator worshiping a player as much as the Belgium-Hungary colour commentator was to Eden Hazard on Sunday night. The Chelsea winger deserved the high praise though, Eden Hazard was brilliant in Belgium’s 4-0 win over Hungary and man of the match by a mile. Hazard dominated the entire game, showing off his trickery and skill and dancing his way through the game with ease. He completed a stunning eleven dribbles, created 4 chances, put in an amazing assist for Michy Batshuayi’s goal and then scored a stunning goal himself only a minute later. It was a brilliant performance by Eden Hazard and one of the best performances of any player so far in Euro 2016. Rating 10/10.

After a disappointing string of group stage matches, Xherdan Shaqiri finally found his form against Poland and was absolutely amazing for Switzerland, providing every single attack for his nation and scoring a stunning equalizing goal in the 82nd minute. Shaqiri had three shots, two of which were on target, completed 92% of his passes, and had 84 touches to help the Swiss dominate the second half and the extra time. Shaqiri was brilliant on Saturday and without him Switzerland may have never had a chance against the Poles. Rating 8.5/10.

Antoine Griezmann was absolutely brilliant for France against the Republic of Ireland and won his team the game by scoring both of their goals in a stunning 2-1 comeback win. Both goals were poacher’s goals and natural, clinical finishes, one with the head, one with the left boot, showing his quality. The Atletico Madrid striker had eight shots, only one of which was not on target. He also helped out in defense with 3 tackles and 3 blocks and of course his goals were fantastic and won France the game. Without Antoine Griezmann France surely would not have won on Sunday afternoon. Rating 9.5/10. 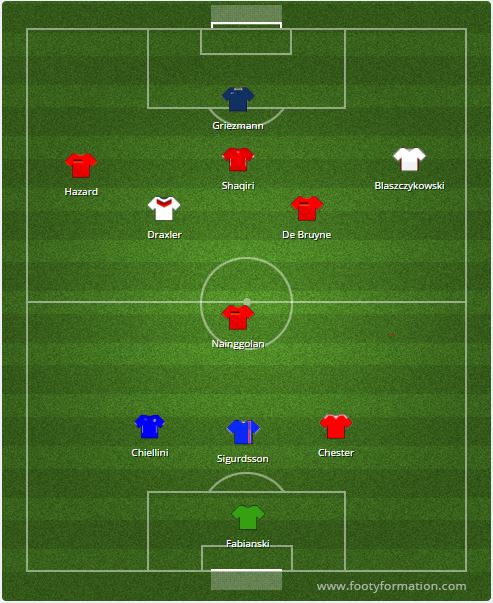 Player of the Week: Eden Hazard

As the commentator said five to ten times, Eden Hazard was unstoppable on Sunday night. Even without his goal and assist he would have won the man of the match award on the night, but the goal and assist just took the performance to a whole new level. 4 chances created and 11 dribbles shows just how dominant the Belgian winger was against Hungary. He was absolutely brilliant and his performance in his country’s 4-0 win was arguably the best performance of anyone so far in this tournament.

Manager of the Week:

Marc Wilmots got absolutely nothing wrong in his team’s 4-0 win over Hungary. Every single player did their job and was absolutely amazing on the night, which paid off as this was the biggest win of the tournament so far. Hungary were actually pretty good on the night, but Belgium were just on a whole different level. Every single player did their job, no one was asked to do anything they weren’t capable of and setting up with Witsel and Nainggolan in defensive midfield allowed De Bruyne and Hazard to dominate all of Belgium’s attacks where Belgium flourished all game long. Ever since their opening game loss to Italy, Belgium have been on a roll and Wilmots definitely needs to be credited for all the brilliant work he has done to get his players’ heads back in the game. Now Belgium roll on and have a great shot of winning the tournament. With this man in charge, they just might actually do it.

It was another tactical masterclass by Antonio Conte and Italy against Spain as they beat the European champions by a score of 2-0. Iniesta, Silva and Fabregas never got into the game. Morata looked way more stoppable than he has in his previous two games, and Italy were resolute and brilliant defensively. They defended as a unit making 19 interceptions, 23 clearances and 16 blocks as a team. They let Spain have the possession, but Spain were forced to get frustrated with the possession they had as Italy didn’t allow them to do anything with their possession at all. Iniesta was actually so bad against Italy that I couldn’t even pinpoint one thing that he did well the entire match and Italy and Conte need to be credited for that. It was another brilliant performance by Italy as they set up to defend and frustrate Spain all game long and Antonio Conte deserves so much credit for the way they played.

I said Iceland would win 2-1, but I had no idea they would win 2-1 by playing that well. Iceland were brilliant on Monday night. They defended like a pack of wolves. Every time England got the ball, the Icelandic players closed them down in numbers. Three or four players were on to the ball in a flash, closing the player down and allowing England no room at all to develop any attacks. Every single time England even had a chance to get off a shot, it was blocked or snuffed out by the resilient back four. After they got back in the match and got two goals, they sat back, let England have possession but didn’t let them do anything with it. They closed down all the angles for passes, never letting them any room to create any chance. They stopped Eric Dier from playing so much so that he was pulled off at half time. They also stopped Wayne Rooney, Dele Alli, Danny Rose and Kyle Walker from playing, all players that have been providing the majority of chances for England in their previous matches. This was one of the best wins in Euro 2016 history and the two managers, Heimir Hallgrimsson and Lars Lagerback deserve so much credit for this brilliant Icelandic performance.

Best Moment: Iceland’s celebrations after the game. A fantastic moment for a fantastic team who fully deserved to beat England and advance into the quarter finals.

So there it is! The Team of the Week for the Round of 16 of Euro 2016. When we meet again it’ll be the quarter finals! Stay tuned!