For the second week in a row, the goalkeeper in this Team of the Week has been the goalkeeper that has played against Portugal. That has to sting for Portugal fans. But Robert Almer was brilliant on Saturday night and was on top of his game to keep Ronaldo and co from hitting the back of the net. The Austrian goalkeeper made 6 saves on the night, some of which were very spectacular. Almer also won 100% of his duels in the air and had 50 touches, just 2 less than Cristiano Ronaldo and almost double the amount that Romelu Lukaku had in the earlier game. Robert Almer was excellent for Austria and helped his country keep a clean sheet against very tough opposition in Portugal. Rating 9/10.

Lukasz Pisczcek was Poland’s standout player against Germany as they held out for a draw against the world champions. The Polish defender made a stunning 8 blocks to stop Germany from hitting the target, while also making 12 clearances, 4 tackles, 2 interceptions and touching the ball 70 times. He was excellent for Poland and helped them keep a clean sheet and get a crucial point that should probably be enough to take them into the knockout round. Rating 8/10.

Gareth McAuley was excellent for Northern Ireland in their match against Ukraine as he gave his nation the crucial goal to give his team the lead and their first ever win in an international tournament. McAuley was also brilliant defensively, making 7 clearances and winning 3 duels in the air to help Northern Ireland keep a clean sheet. Defensive solidity is going to be key if Northern Ireland are going to progress in the tournament and McAuley and his defensive partners showed exactly what they are capable of from a defensive side of things in their 2-0 win over Ukraine. Rating 8/10.

In what must be some kind of record, Patrice Evra, who is just 5’7 won seventeen duels in the air in France’s match against Albania. That’s right, seventeen. Comparatively, the other three French defenders combined won ten duels in the air. Evra was massively important in France’s win against Albania as he put a shaky performance against Romania behind him and was composed and collected all game long. The French defender also created 2 chances, had 95 touches on the ball, 63 passes, 2 tackles, 3 blocks, and 5 clearances. Patrice Evra was one of France’s key men against Albania and played a huge role in their massive 2-0 victory that sent them through to the knockout stages with a game still to spare. Rating 9/10.

Axel Witsel put in a man of the match performance against the Republic of Ireland, helping his team win in a stylish fashion in a 3-0 win. Leading up to his spectacular headed goal, Belgium completed 28 consecutive passes, a record for the Euros since 1980. That illustrates how dominant Belgium were against Ireland on Satruday, and Witsel was at the heart of it. Witsel was everywhere on Saturday afternoon, touching the ball 78 times, and completing 96% of his passes, to give himself a total of 65 passes. The central midfielder also won 100% of his duels in the air, made 2 defensive clearances and of course scored a wonderful headed goal to put Belgium in full control of their match. Rating 9/10.

Kevin de Bruyne set the tone of the match from the very first whistle to get Belgium pumping and going after a disappointing opening match against Italy. The Manchester City midfielder constantly delivered deadly balls in to the opposition’s box, creating chance after his chance for his teammates to score in the first half, before finally assisting Romelu Lukaku with a perfect pass to open the score for Belgium at the start of the second. In total, de Bruyne had eleven crosses and created 7 chances for his teammates to score. He dominated the game and despite Witsel’s man of the match award or Lukaku’s two goals, de Bruyne was probably the best player on the pitch and the most influential in Belgium’s stunning victory. Rating 9/10.

Marek Hamsik stole the show against Russia on Wednesday, playing a crucial part in both goals to give his country a 2-1 victory. Hamsik scored an expertly-taken goal just before the first half ended that ultimately won his team the game and he set up Vladimir Weiss for the first goal as well. The Slovakian midfielder was excellent all night long running non-stop, taking 5 shots, making 52 passes and covering more ground than any of his teammates. Hamsik was certainly one of Gameweek 2’s standout players and was the main reason why Slovakia secured the full three points against Russia. Rating 9/10.

He wasn’t as good as he was on opening day, but Dimitri Payet was still fantastic and France’s key man in their 2-0 win over Albania. Practically every chance that France had came through him and once again, for the second week in a row, he scored a stunning goal to secure his team the three points. Payet whipped in 17 crosses, created 6 chances, had three shots and had a total of 86 touches on the ball, controlling the match and being the figurehead for all of France’s attacks in Marseille. The wing wizard is proving to be one of the tournament’s standout players and had another fantastic performance in Gameweek 2 to help give his team the victory. Rating 9/10.

Nolito was excellent for Spain against Turkey on Friday night as he had a hand in both of Spain’s goals, scoring the second and setting up the first. He was involved in every attack, creating 3 chances, contributing 3 accurate crosses, and taking 3 shots. People who think that Koke should be in the lineup instead of the Celta Vigo winger, including myself, are now beginning to rethink that thought. The Spanish winger was one of the main reasons why Spain were so dominant against Turkey on Friday and he deservedly earned his spot on this week’s team of the week. Rating 8.5/10.

After scoring two goals against Turkey and leading the line so well for Spain in their 3-0 thrashing on Friday night, Alvaro Morata has to be in this week’s team of the week. It wasn’t just the goals though. When you think of Mario Gotze and what’s been lacking for Germany or Olivier Giroud and what’s been lacking for France, Alvaro Morata comparatively was everything that Spain needed. He was full of energy and running all night long, won 2 duels in the air, and was clinical in front of goal, converting 40% of his shots and having 80% of his shots on target. It was a masterclass performance for Spain against Turkey and Alvaro Morata was at the centre of it. Rating 9/10.

After a fairly shaky opening game, Romelu Lukaku stepped up to the plate against Ireland to score two wonderful goals in a 3-0 victory. Lukaku was excellent in the match, scoring twice from his only two shots in the game, completing 87% of his passes and winning 2 duels in the air. He was mobile, his link up play was good and he was clinical in front of the net. Lukaku gave everything that Belgium could have asked for against the Republic of Ireland and is now tied with Morata and a few others for the tournament’s leading goal scorer. Rating: 9/10. 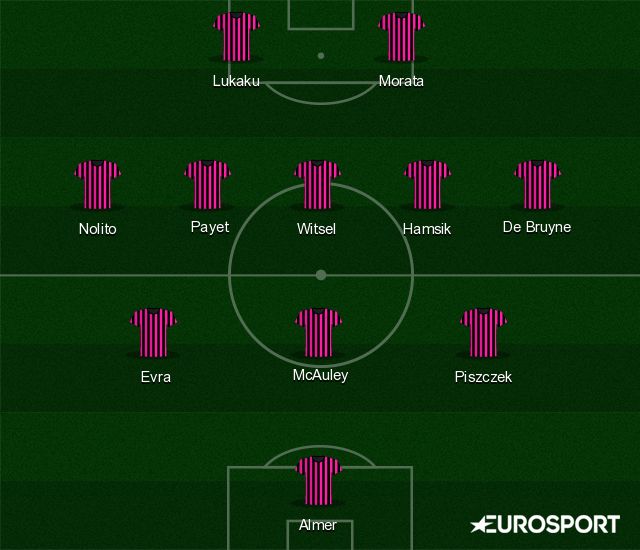 Player of the Week: Alvaro Morata

When you compare what he did on Friday to what so many other centre forwards have failed to do for their countries in this tournament so far, Morata was absolutely fantastic against Turkey. Morata’s two goals were brilliant, but his constant presence and work rate in all areas of the pitch were phenomenal for Spain and he is now looking like an early contender to win the golden boot.

Manager of the Week: Marc Wilmots

After a disappointing opening match against Italy, Marc Wilmots learned from all of Belgium’s mistakes on opening day and turned his team into tournament contenders again. He wasn’t afraid to change his lineup, adding in Carrasco to move De Bruyne into a more central position and adding the steady Mousa Dembele who was excellent until he had to go off to injury and Thomas Meunier, the right fullback who assisted the second goal and had a big hand in the third. Belgium attacked and defended as a team, which was a huge improvement from their match against Italy. Wilmots’ team also had 57% of the possession, won 59% of the balls in the air, had 17 shots and outplayed the Republic of Ireland in every regard to win the match 3-0. It was the perfect performance from a Belgium perspective and Marc Wilmots will definitely be pleased with how his team are looking going forward in the competition.

Game of the Week: France 2-0 Albania

Best Moment: The Mastermind‘s moment of the week this week brings us back to France again, this time with Antoine Griezmann who scored a crucial headed goal in the 90th minute to give his country a 1-0 lead over Albania. It had been a night of missed chances for France up until that point as they had squandered chance after chance to take the lead. Finally in the 90th Adil Rami crossed the perfect ball for an unmarked Griezmann who headed in to the back of the net and gave France the chance to go on and get the three points.